Blending Hawaiian food with Mexican is not

the most obvious cuisine fusion, but Tiki Taco in Dupont Circle shows that the combination can be dynamite.

Tiki Tako’s creator is a Maryland native but had lived in Hawaii for 6 years and found himself missing the cuisine.   I’m not sure how he decided that tacos were “the perfect vessel for sampling this exquisite cuisine“, but he did.  In addition to taco’s, the restaurant has several other offerings from the island nation, the most prominent being Poke, a preparation of raw fish that is one of the main meals of Hawaii . 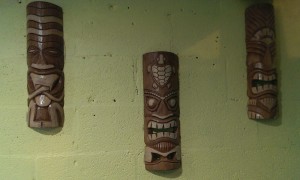 On my first trip there, I stuck with the tacos.  A variety of fillings are available, on either corn or flour tortillas.   The cost is $3.50 each or 3 for $9.75.   Seasonal variations are also available, the price of which varies.  I ordered a trio, the Kailu Pork, Island Fish, and Fried Chicken Tenderloin.  The first two were from the standard menu, while the chicken was a seasonal special.  All three were very good, but the chicken tenderloin was exceptional and really stood out.  Tender and juicy, it is a great taco.

My companion also had the fried chicken, along with the Pork Belly (minus the kimchi)  and the Kalbi Beef.  Her favorite was the chicken as well.  She also notes that the beef taco too salty. 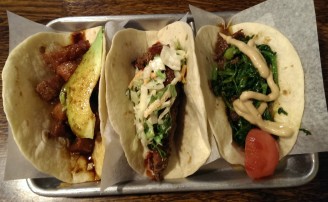 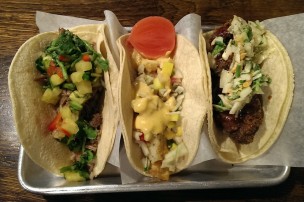 Tiki Taco also has some desserts.  This included a Portuguese confection called Malasada, which is balls of fried dough dipped in granulated sugar and served in a bag, a style reminiscent of beignets.  Accompanied with a chocolate sauce, it was a light and tasty way to end the meal.

Malasada in a bag!

Tiki Taco serves a high quality tacos, quite a bit different from the standard Mexican fare.   I recommend the place, but be aware that it is a very small restaurant with limited seating space.  It can’t really handle large crowds.  It seemed like a fair amount of their business was take out.  I do plan on going again, and I hope to sample the poke.

One thought on “Tiki Taco”