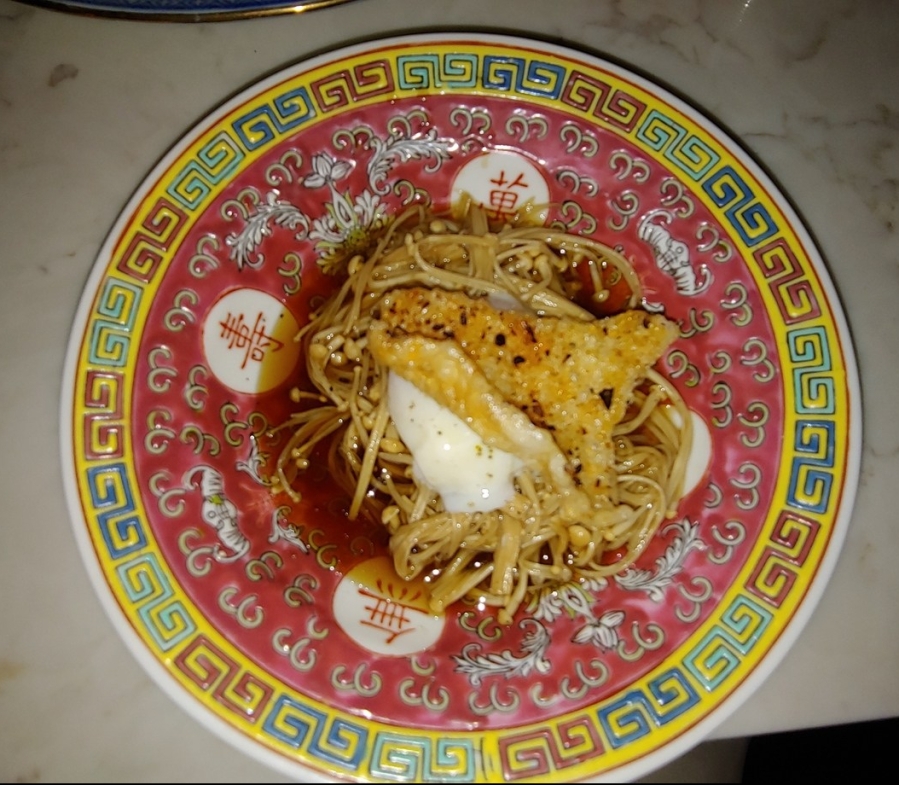 I was recently in Northwest DC to see a play and I decided to try a hot new tapas place in Columbia Heights, the Queen’s English. I first heard about the restaurant from DCist, who gave it a rave review.

Despite the name, Queen’s English serves Asian food. And not just any Asian food, but the less commonly found cuisine of Hong Kong. As with most tapas places, it is best to come with a group of people and sample a lot of plates. I was by myself, but fortunately the dishes were small enough that I could try several. (Although, this made a big impact on my wallet).

The bartender (I was seated at the bar) described the dishes as in coming in three sizes: small, medium, and large. All the dishes I saw looked fairly small, but certainly some were bigger than others. However, each and every dish was fantastic.

I started the meal with the special of the day: salt and pepper puffer fish, fresh from Chesapeake Bay. Atlantic puffer fish it, unlike their Pacific brethren, are not poisonous. The bartender explained that the Queen’s English does not have specials every day, but whenever the chef comes across an ingredient he likes he will buy it and make a dish from it. I was quite happy with the result. Lightly breaded and fried, the fish was moist and delicious.

Next up I had the enoki mushrooms. Enoki mushrooms are long thin mushrooms, commonly found in Japanese soups. These were served with a soft poached egg and topped with a tapioca crisp, all in a soy based broth. Guided by the bartender, I broke the crisp and mixed everything up together. The result was amazing. The mushrooms were soft and tender and full of flavor, The star of the dish was the broth, providing depths of flavor. Quite tasty, I could have eaten a whole meal with just that.

I was still a bit hungry and decided to get a third dish. The server recommended the Daikon Fritters. Having spent extensive time in Japan, I am quite familiar with daikons, giant cylindrical radishes that are not as bitter as their western counterparts. So I wasn’t sure what I was going to get. What came out was nothing like I was expecting: four fritters topped with sauces and a powder made from ground crisp pork. The sauces were a thick, brown soy based sauce and Japanese mayonnaise. The fritters were soft and chewy, while the sauces complimented it perfectly. If you have ever had Okonomiyaki, the dish reminded me quite a bit of that. I was quite happy with the recommendation.

At this point I was satiated, but I decided to try the dessert. I didn’t catch the name, but it was a thin disk of gummy rice cake covered with salty caramel and black sesame sauce, with everything topped with crushed cashews. This was sweet and salty at its finest! All the flavors intermingled and reinforced each other in subtle ways. The bartender called this dish a puzzle, and that is the perfect description. The combination was astounding.

There were many other dishes on the menu that I did not try. But seated at the bar as I was, I did see many of them come out. They all looked fantastic, but the one I wanted to try the most was the naked dumpling. This has all the dumpling ingredients, but no shell. The dumpling “fillings” are shaped in the form of a dumpling and then grilled. I was salivating at them, even though I was quite full when they came out.

Queen’s English is tastefully decorated. The walls are covered with cherry blossom themed art and the layout is simple yet elegant. Despite this, the place has a down home atmosphere; the kind of feeling you get in a restaurant in a small town. The staff was very warm and welcoming, offering several recommendations and were genuinely interested in what I thought of the food. I was greeted by the co-owner, Sarah when I entered, although she did not introduce herself until I left, when she bid me farewell. I left feeling with a strong sense of community.

I was pleasantly surprised by how fast the service was. Each dish came out within a few minutes of being ordered. I finished my meal with plenty of time to get to my play.

Overall, I thoroughly enjoyed my experience at Queen’s English. The food is top quality and the atmosphere sophisticated but comforting. I will definitely be back.