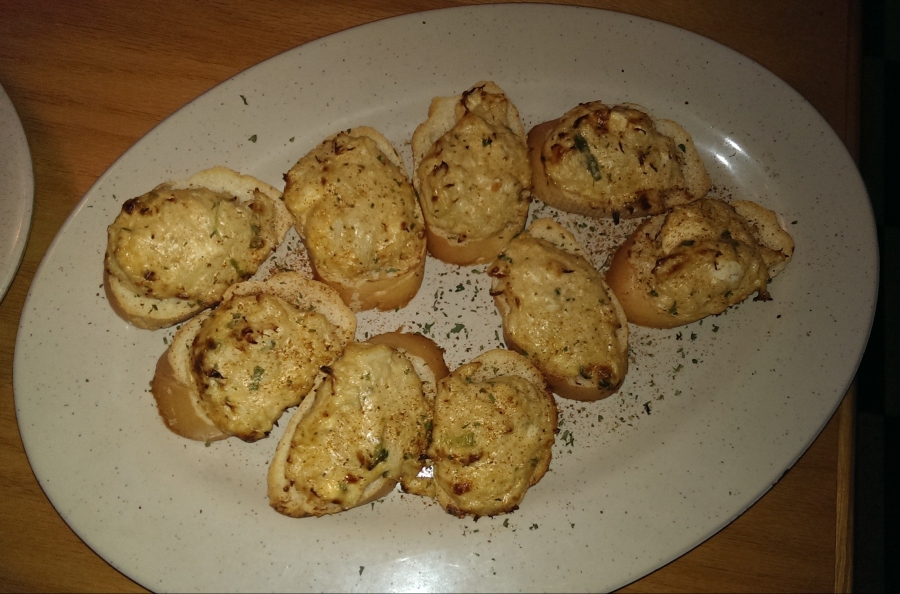 I was in Bowie to see a play and decided to look nearby for a good place to eat dinner.   I came across a southern sandwich shop that had really good food, including desserts.

Chesapeake Grille and Deli is both a sandwich shop and a grill.  The one in Bowie is their second location.  The original is in southern Maryland, in Dunkirk.   The restaurant stuck me as primarily a sandwich place, but that is not quite right as they have a full line of surf and turf options.  I suspect their southern location has less of a fast food feel to it.  Meat entrées include meatloaf, pulled pork, steak, and burgers.  Seafood entrées include salmon, fish tacos, and the quintessentially Maryland crab cakes.   They also have a full line of appetizers and desserts, along with the sandwiches. 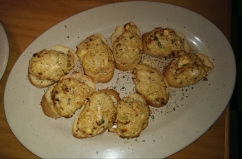 For my appetizer, I ordered the Crab Dip Bruschetta, small pieces of toasted French bread topped with a cheese/crab dip. With a healthy dose of Old Bay seasoned crab, I found it a nice twist on the classic bruschetta.  As I got there late afternoon,  I was not hungry enough to  eat a full entrée. So I limited myself to the sandwich menu. As I have had a lot of barbecue recently, I skipped all the pork items and settled on the prime rib sub. The sub is served with toppings of your choice, and I decided on pickles and sautéed onions. The result was juicy and delicious, although a bit salty.   The portion size was very generous and I could have made two meals out of it.  I substituted a garden salad instead of the normal chips side  (the chips came out anyway). The salad was quite well done, being full of fresh vegetables.

Chesapeake has a full line of desserts, including the state dessert of Maryland: the Smith Island cake.  The classic Smith island cake is layered with fudge icing.  They had that version, but they also had a banana one as well.  As the cashier highly recommended the banana cake,  I went with that.   The cake dense with a strong banana taste, balanced out nicely by a light cream cheese frosting.  The combination made the cake slightly reminiscent of a carrot cake.    I liked it, although being a bit of a chocoholic I do prefer the original Smith Island.

All in all, I found the Chesapeake Grille and Deli to be a solid place to eat, a mix between a fast food restaurant and a sit down restaurant.  The food is a bit pricer than a fast food place, but the quality is there to match.