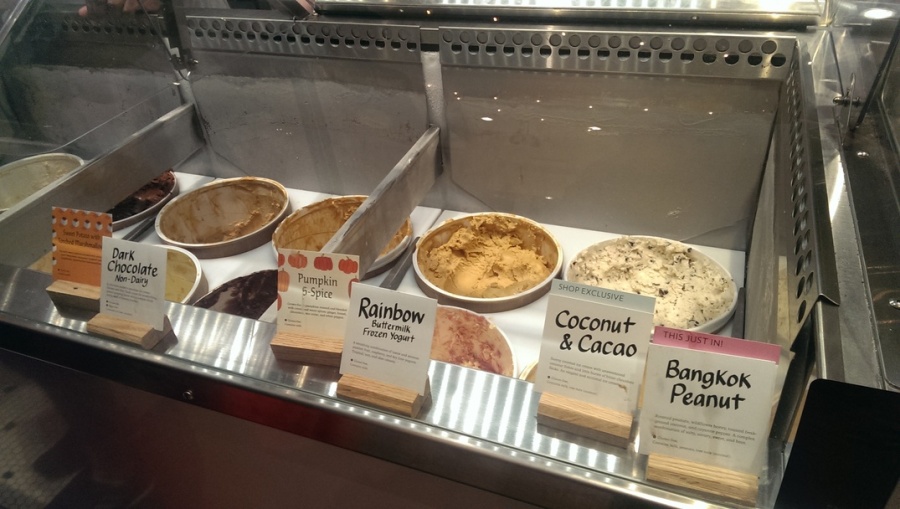 The Washington DC area had many spots that server great home made ice cream. Here are my favorites.

My hands down favorite place to go for ice cream is Pitango Gelato. Yes, I know gelato is not ice cream. But their gelato is so good, it tops my list of places fo frozen treats. I first had Pitango Gelato shortly after a trip to France. After having gelato in Europe, I was not expecting an American place would be able to compare. To my surprise, Pitango’s gelato was, in fact, every bit as good as to what I had in France.

What make Pitango’s gelato so good? Part of it is the ingredients: they use milk sourced from organically bred cows in Pennsylvania. But in my optinion, what really sets Pitango apart is their process. They buy their milk unpasteurized and pasteurize it during the gelato making process. The little bit of tradecraft makes all the difference in the world.

Pitango has 20 different flavors to choose from. About half are gelato and half are sorbets. Offerings include traditional Italian flavors including Nocciola (Hazelnut), Fior De Latte (“Flower of Milk”), and Gianduja (chocolate- hazelnut, a personal favorite) as well as other flavors such as vanilla, apurimac (a speciality chocolate from Peru), cardamom, Sicilian Almond, and Pistachio. I find many of their flavors are delicate and subtle, and picking out suitable pairs to eat together is a bit of an art.

Pitango also has a small selection of beverages available. These are mostly coffee or tea drinks. But during the summer months they have fresh made lemonade and during the winter months they have Italian sipping chocolate. Italian sipping chocolate is to die far and is very hard to find in this country. Whenever Pitango has it, I make it a point to stop in and have some.

Pitango started in Baltimore in 2007, but they now have locations in the area. I go to the one in Penn Quarter, near the Archives-Navy Memorial stop, which opened in 2012. They recently opened a new location in Adam’s Morgan.

For actual, honest to goodness ice cream, my favorite place to go to is Jeni’s ice cream. Jeni’s is a nationwide chain with locations in 10 cities throughout the US. The DC location is on 14th street, not far from the U Street Metro station. Jeni’s Ice Cream started in 2002 in Columbus, Ohio (where their headquarters still is), although Jeni had been experimenting with recipes and honing her craft since 1996. Her attention to detail and exquisit taste for unusual flavor combinations is readily apparent. Jeni’s is rightfully famous for its large selection of artesianal ice cream flavors.

Jeni’s has so many flavors, I cannot pick a favorite. I usually go with one of the seasonal specials, so I am always trying something new. I can say that I have not had a bad ice cream yet.

One other thing that sets Jeni’s apart is the waffle cones. The cones are made fresh in the store. While you can get the ice cream served in a waffle, I usually go for just get a piece of it in the bowl (no extra charge). This has the convenience of a bowl while still getting the crunch of a waffle.

While preparing this article, I realized my first exposure to Jeni was not through her shop, but on an episode of the Splendid Table. She was discussing her new book on home ice cream recipes. Home cooks do not have the equipment professional ice cream makers have, and cannot use the same recipe. Jeni has perfected a home ice cream recipe that gives professional tasting results. I have not tried it yet, but I plan to.

Since 2002 Moorenko’s Ice Cream has been a staple of downtown Silver Spring, a family run operation serving small batch ultra-premium ice cream. What makes it ultra-premium? The rating is based upon the a amount of milk fat. The minimum amount of fat to even be called ice cream is 10%. Premium ice creams have 12-14% fat. Super-Premium is 14-16%. Above that is the realm of Moorenko’s, the ultra-premium.

While not having quite the variety of Jeni’s, Moorenko’s does have a wide selection of unusual flavors. As they serve small batch, they can and do run out. I have not been there often enough to say I have a favorite, but I highly recommend the Umami chocolate.

Moorenko’s is located on Georgia Avenue in Silver Spring but it is in an older area. It can be found just south of the old Silver Spring train station, several blocks away from the current cultural center of the city. But it is certainly worth the walk.

One of the most iconic ice cream shops in DC is Larry’s Homemade Ice Cream, which has been serving homemade ice cream on Connecticut Avenue near Dupont Circle since 1985. They make their own ice cream right there in the shop. I’ve only been there a couple of times, so I don’t have a favorite flavor yet. But I can vouch for the quality.

Tucked away down a flight of steps, Larry’s has the ambience of an old style ice cream shop. This makes it a perfect place to stop on a hot summer day. Larry’s also has a small selection baked goods, including cookies, cup cakes, and baklava. I have not had them yet, but they look delicious.

I was in Alexandria for an Irish festival and was in the mood for some ice cream afterwards. There were a couple of choices available, but I settled on The Creamery. It is a small shop, but it has some great ice cream.

From their many flavors, I decided to try the orange chocolate chip. This turned out to be fantastic! While orange and chocolate are a classic combination, I have not had them together in ice cream before. The flavors blended perfectly, making for a nice treat after a hot day at the festival. I plan on making the Creamery a regular stop when I am in Alexandria.

As I was talking about my favorite ice cream places in DC, I was told that I had to try Thomas Sweet in Georgetown. So I made a special trip there to try it out.

Thomas Sweet is the granddaddy of all ice cream shops in DC, having served Georgetown since 1979. They now have locations in other cities, but this is the original. It is a classic old style ice cream shop. When I stopped by, there was a bit of a crowd. But the line moved quickly. This was during the summer break; I expect the lines are longer during the school year.

Like Jeni’s, there is a large selection of ice cream flavors to choose from. Fortunately, I had plenty of time to choose. One of the signs on the wall quoted a review saying their bittersweet was “The Best Chocolate Ice Cream in the world!” So I had to try it. It was quite good, although I’m not sure I would call it the best. I also had two other flavors: hazelnut and chocolate marshmallow. I found the hazelnut too strong; I am used to much more subtlety in nut flavored ice cream. The chocolate marshmallow was top notch, my favorite of the three.

Thomas Sweet is famous for its mix-ins: candy that is added to ice cream. They had all sorts, but I made special note of oreos, gummy worms, and malted milk balls. I had a cone and so could not partake. They looked quite delicious and I regret my decision. Next time.

One evening during the summer, a friend was dropping me off at the Georgia Avenue Metro stop. We were in the mood for some ice cream and found Here’s The Scoop nearby. This is a warm and friendly neighborhood ice cream shop, located in the Columbia Heights area of Northwest DC, not far from Howard University. It opened this summer, making it the youngest place on this list.

Unlike many of the other places in this post, Here’s The Scoop does not make their own ice cream. They serve Gifford’s Premium Ice Cream. In addition to ice cream, they also have a small selection of baked goods: cookies, cakes, and even peach cobbler. My companion and I really enjoyed the family oriented atmosphere of the place. Creating a space a community could gather is, in fact, the goal the owner, Karin Sellers, had when she founded the shop. She is succeeding.

For my part, I had two flavors: the Smores and the moose tracks. Both were good, but the Smores was my clear favorite. My companion had the cookies ‘n cream, her favorite. We also sampled the baked goods. I had a chocolate chip cookie and my friend had the oatmeal raisin. Both were to die for. If you are in the area, Here’s the Scoop is worth stopping in.

Any one of these places has fine ice cream and is well worth visiting. I do find that in each of these places you have to pick your flavors carefully. But that should not be surprising.

Do you have a favorite ice cream shop? Let me know as I would like to hear about it.

One thought on “Ice Cream in DC”