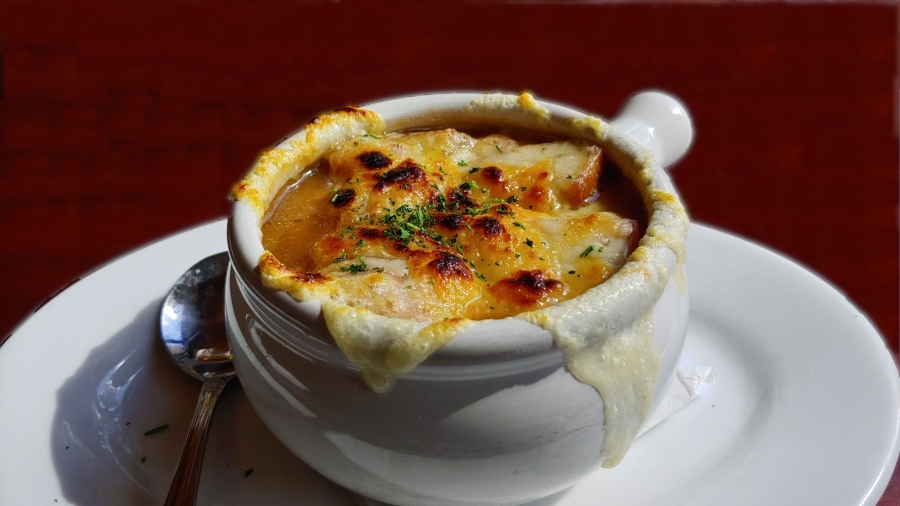 I was in the mood for some British pub food. I did a quick Google search and found several candidate pubs. Of those, Elephant & Castle seemed like it is of the more authentic ones. Also on the plus side was its location – on Pennsylvania Avenue right in the heart of DC. So that is where I went. I am glad I did.

Elephant & Castle is a chain restaurant, with about a half a dozen locations across the US and a couple in Canada. Originally owned and operated out of Boston, the chain was bought by a Canadian company in 2012 and continues to be owned by them. The name itself derives from an area in London, the naming of which dates back to a 19th century inn.

When I arrived at the Penn Avenue location, I was quickly seated. The first decision I had to make was what to drink. They had a lot of American beers on tap, but a couple of British ones were available as well. I almost ordered a Guinness, as I do like stout beers. But they also had Strongbow Cider. As I was planning on ordering some heavy food, I decided to go with that. In true British fashion, it came out in a themed glass. And it was British sized pint as well! Cool and refreshing.

For my meal, I ordered both an appetizer and an entree. They had several appetizers that appealed to me, but the one that stuck out was the Ale and Onion soup. The soup came out in a large serving sized crock pot with melted cheese oozing on top. The breading underneath was croutons, giving it a hardy substance. The soup itself was filled with large, juicy onions along with a bit of well cooked mushrooms. It was delicious.

For entrees, the have all the British classics you would expect: Burgers, Fish and Chips, Bangers and Mash, an assortment of pies, and even Butter Chicken. I decided I was in the mood for a pie. But which one to try? As I was deciding, I noticed that they have “The Wee Pie Flight” that has a sampling of all of their pies: Steak and Mushroom, Chicken Pot Pie, Potato and Leek Soup, and Shepherd’s Pie. Except for the Shepherd’s pie, which has a potato topping, all are topped with a flaky puff pastry. Each one was excellent. Of note are the Shepherds Pie, which was chuck full of meat, and the Steak and Mushroom pie that had big, juicy chunks of steak in it.

Elephant & Castle has a small selection of desserts, including the classic British dessert Bread Pudding. But I wanted to try their signature dessert: the Big Ben. It consists of two large brownies with ice cream in the middle and topped with whipped cream and a fudge caramel sauce. The brownies were moist, cake-like, and very chocolatey. Just delicious. The whipped cream was fresh. I do have one complaint. I wish there was more ice cream, as the little that was served had melted by the time the dessert arrived. Big Ben is sized for two, but I had no problems finishing it.

The Penn Avenue location of Elephant & Castle has ample indoor and outdoor seating, although physical distancing rules had half of the seats closed off. Since I was there on the weekend, I had no problem finding seating. The service was prompt and courteous. The place certainly looked like a British pub, but lacked the crowds typical of a pub. In normal times, I expect the place is quite rowdy. Overall, I found the quality of the food quite high and recommend Elephant & Castle. Other US locations can be found in Boston, Chicago, and Seattle. The Canadian locations are in Toronto and Winnipeg.

One thought on “Elephant & Castle DC”