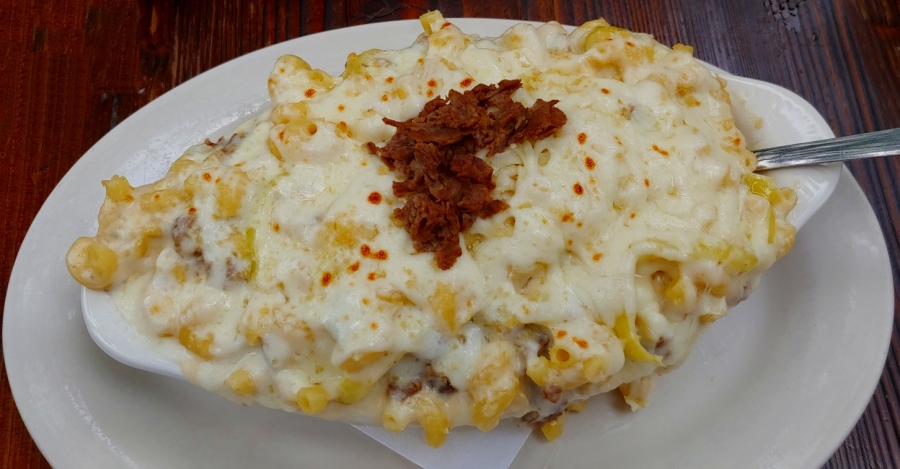 The Market Street in Corning, New York is a lovely little downtown area with lots of neat shops and restaurants. I like to stop there whenever I have the chance. During the COVID pandemic, the street was shut down to traffic*, making it a pedestrian only area. I think the result was great; a perfect place to go out, shop, and dine.

One of the many restaurants on the street is a local brewery called, appropriately enough, Market Street Brewing Company. With plenty of beers to choose from and a small food menu, it is a good place to eat. And they have ample outdoor seating including a lovely rooftop patio, which is where I ate. Note that these pictures are from pre-COVID times.

Here is what they had on tap when I visited:

Being a fan of both stout beers and the Three Musketeers, I went with the D’Artagnan. I found it a very good stout.

For my meal I had the soup of the day, a vegetable bisque, and the Barbecue Burger. Both were excellent. The soup was rich and flavorful and the burger was thick and juicy. I would get either again. I was not a big fan of the pasta salad though, as lacking much sauce it was a bit dry.

Mooney’s Sports Bar & Grill is a regional chain combining a sports bar with the feel of an Irish Pub. It has several locations all over Western New York. The one in Corning is right in the center of market street. Indoor seating was available, but on a pleasant day it is nice to be able to sit outside.

Mooney’s is known for their Macaroni and Cheese, and they have signs everywhere proclaiming “Home of the Mac ‘n Cheese.” So I had to try that. But I also love Hungarian Hot Peppers and I noticed they had that in their appetizers section. But I felt having both peppers stuffed with cheese and the macaroni would be too heavy. What to do?

Then I noticed that in the soup section, they have a Stuffed Hot Pepper Soup, consisting of Italian sausage, peppers and cheese. Furthermore, it was a Buffalo Soup Fest winner. So my decision was made. I would have the award winning soup, satisfying my craving for hot peppers, and a Mac n’ Cheese. It was the best of of both worlds.

The soup was every bit as good as I expected it to be. Rich and creamy with plenty of sausage and peppers, it was delicious.

Now for the Mac N’ Cheese. Mooney’s has almost two dozen different flavors. These include: the Original, Buffalo Chicken, Philly Cheese Steak, Reuben, and even Pizza. I went with another award winner, the Bomb, which won the Binghamton Mac Fest in 2017. Filled with chopped steak, stuffed banana peppers, and plenty of mozzarella, I have never had Mac n’ Cheese so good. It was a lot of food, though. As tempting as it was to eat the whole thing, I practiced some self control and took half of it home for another meal.

Needless to say, I greatly enjoyed my lunch at Mooney’s. The food was superb and the service was quick and friendly. I plan on going there again, perhaps in Corning or maybe one of their other locations. I definitely want to try some of their other menu items.

For a fun place to eat at, I recommend the Old World Cafe and Ice Cream. It has a bit of the ambience of a European style bistro, but with plenty of knick-nacks giving it an American flair as well.

I’ve mainly gone there for ice cream there. I’ve gotten a cone on my first trip and a brownie sundae. Both were very good. The sundae contained a generous amount of a very fudge-like brownie, topped with vanilla ice cream and whipped cream. It was high quality ice cream, although the whipped cream tasted like it came from a can. Still, I recommend it. Old World has a couple dozen flavors to choose from. They have standards such as vanilla and chocolate; classics flavors like Butter Pecan, Coffee, Cookie Dough, and Moose Tracks ; and seasonal flavors such as Peach, Strawberry, and Raspberry Truffle.

As for meals, they have a selection of soups, salads, and sandwiches. Sandwiches include vegetarian (Veggie Layer with carrots, cukes, tomatoes and sprouts or The Globe with cheese, avocado, cuke, and sprouts) ; deli meats such as Roast Beef , ham, or turkey (with berries, avocado, or Mediterranean), chicken (salad or baked); tuna; or shrimp. Old World Cafe also has a selection of paninis which include The Big Cheese, Honey Ham, Steuben Ruben, and Saltimbocca. It’s a nice selection with some real flare.

I ordered the Turkey Tost, which consists of turkey, cheddar, bacon, and tomato. It is a big sandwich with generous portions of ingredients. I found it quite hearty. And also a bit greasy. It reminded me a bit of a grilled cheese sandwich, but where the cheese is not the dominant ingredient. I ate the whole thing, but half would have been filling enough.

Of course, it wouldn’t be a cafe without some coffee drinks. It has a small selection containing items such as Espresso, Cappuccino , and Lattes. I am not a coffee drinker, so I cannot comment on the drinks.

Another place that caught my eye is Poppleton Bakery and Cafe. Through the window I saw an array of baked goods that looked amazing.

I was there for lunch, so I needed to get an entree. The menu mostly consisted of crepes and paninis. I have a fondness for crepes, so I ordered that. However, the paninis were definitely more popular as that was what most of the other customers were ordering. (And there were plenty of people coming in.)

On the recommendation of the server, I ordered a BLT turkey and cheese crepe. This was a hefty crepe; more like a burrito with a crepe wrapping. But it was good. Filled with lettuce and big chunks of turkey, I got my money’s worth.

But I could not go to a bakery and not get a baked good. They have plenty to choose from, with a selection of brownies, cupcakes, and cookies. But on that day I was saving room for ice cream, so I wanted to get something light. I ended up getting a Buckeye, that delightful combination of peanut butter and chocolate. It was as good as I anticipated .

On another visit, I had a slice of peanut butter chocolate cake. I was surprised with the size of the slice I got. It was enormous!

A chocolate layer cake with a peanut butter icing and a thin layer of ganache on top, it is sinfully delicious. I plan on getting more of Poppleton’s backed goods. They are first rate.

Other places in Corning.

Market Street has a wide variety of restaurants, with cuisines that include Pizza, Italian, Barbecue, Indian or Thai. I guarantee you will be able to find one that you like. The ambience of the location is wonderful: quite relaxed and very family friendly.