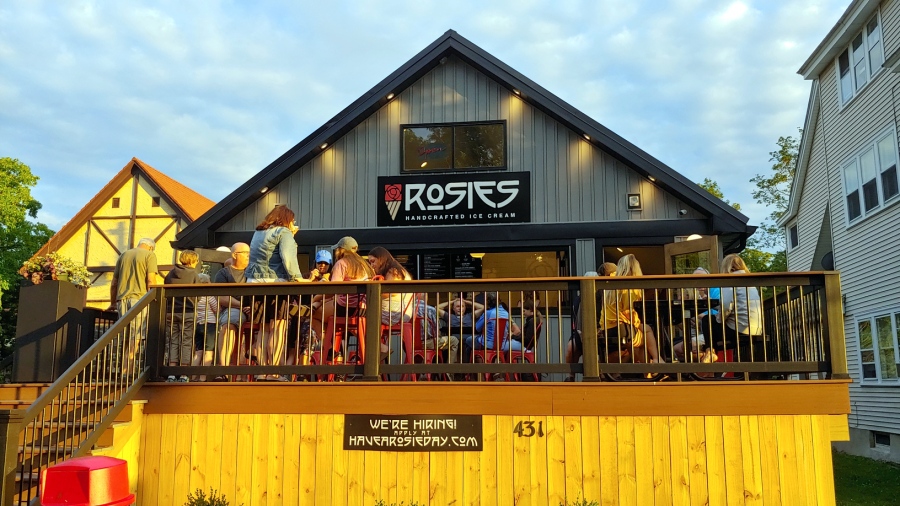 In East Aurora, New York there’s a hot new ice cream parlor serving house made ice cream. I undertook the journey there, just 20 minutes south of Buffalo, to see if it lives up to the hype. It most certainly does. Rosie’s Handcrafted Ice Cream serves some of the best ice cream around.

Rosie’s was the dream of the husband and wife team of Deacon and Cassie Tasker, motivated by warm memories of childhood summers and the desire to recreate them for others. Deacon is the son of Buffalo football legend Steve Tasker. They opened Rosie’s in their hometown East Aurora on April 8, right next to the famed Roycroft Campus. The restaurant is named after their daughter.

Ice Cream to the chef is like canvas to a painter, and Rosie’s has a full gallery to choose from. In addition to vanilla and chocolate, they have unique flavors with names such as Yabba Daba Doo! (made with Fruity Pebbles), Cold Brew (coffee), Honeylou (lavender and honey), and The Breakfast Special (maple and bacon). Also on the menu are dairy free options, which consist of sorbets and oatmeal based ice cream.

Portion sizes are 1,2, or 3 scoops, served in either a cup or a cone. Freshly made waffle cones are also on option, costing an extra $1. I went for three scoops in a waffle cone. The scoops were quite generous; I was surprised the server was able to get all three in one cone. I was also surprised I was able to eat it without any ice cream scoop falling off.

That Waffle Dough is a chocolate ice cream with chocolate chip peanut butter cookie dough and bits of waffles mixed in. Chocolate with peanut butter and a bit of a crunch? A great twist on a classic combination. That seems to be a hallmark of Rosie’s.

Last but not least was the Bada Bing Bada Bourbon, a caramel ice cream with swirls of caramel and bourbon toffee glazed pretzels. Their twist on a butter crunch, it too is quite good. All of their flavors had very creamy ice cream that was a delight to eat.

My companion went with a cup. She also had the Bada Bing, but her second scoop was Threat Level Midnight. This is a dairy free vegan ice cream made with oatmeal. Consisting of dark chocolate and dutch cocoa, it is quite decadent. She described it as practically a fudge. We loved it. But we felt it need something lighter to cut the richness. Cool Whip would do the job. Or vanilla ice cream, if you don’t need to be strictly vegan.

Rosie’s also has specialty items such as ice cream sandwiches and brownie sundaes (they were sold out of the latter). I hope to try them next time I visit.

Rosie’s Handcrafted Ice Cream turned out be very popular. There was a long line out the door the entire time I was there. But the line moves quickly. We had to wait less than 10 minutes before I got our ice cream. But even if the wait was longer, it would have been worth it. The ice cream is that good.