Main St. Pizza Company is a  great little restaurant located, you guessed it, on Main Street in Batavia, New York.  It started off as just a pizza place, but has grown into a full fledged Italian restaurant.

I started off with the minestrone soup, which was jam packed with vegetables, had great depth of flavor, and not salty at all.  Really top notch soup.

My companion had the meatball appetizer.  Each meatball was the size of a softball and could have been a meal in and of itself. (As it turns out, my friend made 3 meals from them.)   The meatballs were solid and meaty while the sauce was a good, traditional Italian red sauce. 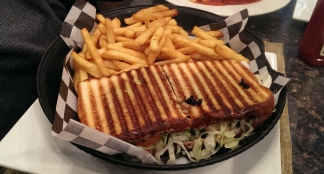 For dinner I had the chicken parmesan, while my friend had the chicken panini.   The chicken parmesan was generously sized both in breadth and depth!  There were two layers of chicken in it, smothered in mozzarella and covered with the same delicious sauce that the meatballs were served with.  I had enough for four meals and savored each one of them.  My friend thought his panini was very good as well.   His only  complaint was that it was too thick.  Each half had a full chicken breast, which made it hard to eat.

Main St. Pizza company has several desserts but I was way too full to partake of one.  Maybe next time.   The other fare, including the pizza and wings, looked amazing.  The couple next to us had a Chicago style deep dished pizza that was just loaded.  They took most of it home.  The place has a nice casual ambience.  It even has live music, giving it a touch of elegance without being too upscale.  I would definitely go back.