I recently had the good fortune to attend a conference in Tucson, Arizona.  Tucson is the perfect city to visit in January as the weather is great, there is a lot to see, and plenty of good places to eat.  Here is where I went.

Normally, I look for small local restaurants and eat exclusively at those.  On this trip, however, I was at a conference and spent most of my  time at the resort.  So for most of my meals I ate there.  The conference was at the lovely El Conquistador, a resort with a spectacular view and great services.  It also has very good food.

Whenever I am in the southwest, I like to have a good margarita.  So shortly after checking in, I ordered one at the resort bar.  The bartender suggested I try the prickly pear one.  I’m glad I followed her advise, as it was quite good.  While a little sweeter than a typical margarita, it still had that distinctive taste.    Prickly pears must be a favorite of the chefs at the resort as they were featured several times during the week.  Besides the margarita, they served us prickly pear yogurt and prickly pear cheesecake.  All were delicious.

For my meal, I went with the house burger.  This was topped with sautéed onions and cheese, served on a pretzel bun and accompanied by parmesan fries. The burger was juicy and full of flavor ; I loved it.   The fries however had scant amount of parmesan and were hardly distinguishable from ordinary fries.   At another meal, I had the Poblano  Ceasar salad, a nice southwest twist on a classic.  It was quite good, as were all the meals served throughout the conference. 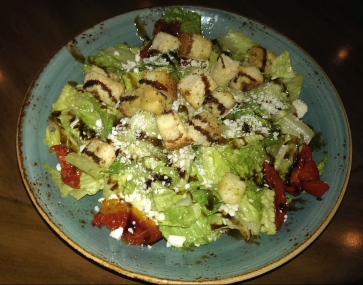 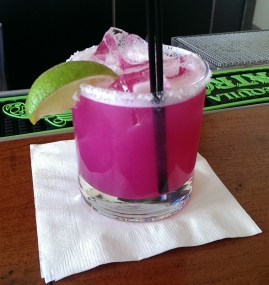 Guadalajara Original Grill is a local restaurant serving fresh, authentic Mexican food.  Not too surprisingly, the owner is from  Guadalajara, Mexico.   It has two locations ; I went to the one on Oracle road.  I went there on the advice of the resort’s concierge, and found his recommendation quite sound.

The place is famous for its table side salsa making. Using a mortar and pestal and the ingredients you choose, the server mixes it together right in front of you, all the while offering tastes so she can adjust.  It was some of the best salsa I’ve ever had.

Guadalajara’s signature dish is molcajetes which consists of marinated meat,vegetables, and cheese served in a hot stone bowl, the namesake of the dish.  Served with freshly made corn or flour tortillas, the concept is similar to a fajita except that the molcajete has a lot more sauce, so it is more akin to  a stew.  You have your choice of meat: steak, chicken, or shrimp.  Or in the case of the Molcajete Ultimo, all three. I went with the steak and thought it was fabulous.  I recommended the place to some of my fellow conference goers and they quite enjoyed their meal as well. 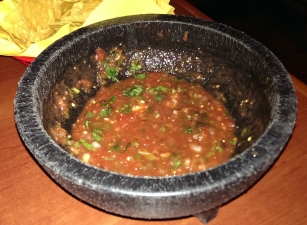 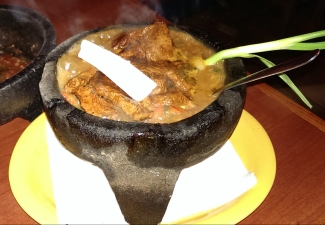 El Charro Cafe is a Tucson institution, serving home made Mexican food for 95 years.  It is still owned and operated by the same family, and the original location on Court Avenue in downtown Tucson was built in 1896 as the family’s residence.

The cafe is most famous for its Carne Seca, a dish made from marinated dried beef which is then chopped , seasoned, and cooked with tomatoes and onions. El Charro dries the beef on its roof, in the hot Sonoran desert sun. This truly unique dish was quite wonderful.  The Carne Seca platter would have been enough for a meal, but Tucson also has the best tamales in the world and I did not want to miss out.  So I also had a side of the pork tamale and it met my expectations.  My companion had Tia’s Topopo Salad with shrimp which looked amazing.  She enjoyed it very much.

Maynards Market and Kitchen is an upscale French restaurant in the heart of downtown Tucson, right next to the historic train station built at the turn of the century.

We decided to forgo any appetizers and stuck with entrées. I had the chipotle rubbed pork chop while my companion had the braised lamb shank. I found the serving of pork quite generous. It was thick, but still moist and tender. I did not taste the chipotle rub, so its presence was subtle. My friend quite enjoyed his lamb shank. While Maynards has several desserts, including cheesecake and a flourless chocolate torte, we did not have any as we were headed elsewhere for that. 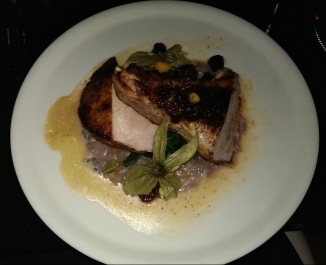 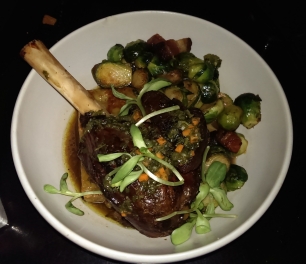 After Maynards, we went to Eegee’s for dessert. Eegee’s is a fast food chain found all over Tucson and almost nowhere else. They have upwards of 20 locations in the city. They have the typical array of sandwiches and subs but are known for their ranch fries and the dish they are named for: the eegee.

The eegee is an Italian ice style frozen treat. The flavors offered change with the seasons and while we were there the eegee of the month was prickly pear. It had been several days since I had something with prickly pear in it and I was undergoing withdrawal, so that is what I ordered. Believe it or not, that is the small size. It was light and refreshing, not overly sweet, and complemented the heavy food we had earlier quite well.  I imagine it would be perfect on a hot summer day.

I’ve mentioned a couple of times in the past that whenever I visit someplace new I like to pick up a local cookbook that is representative of the place.  I had my choice of cookbooks at a local used bookstore called Bookman’s.  Bookman’s has locations all over Arizona but it originated in Tucson.   More than a bookstore, the place also has musical instruments, games, CDs, and videos.    Some of those are standard for book store chains nowadays, but Bookman’s has been doing this since the 70s. 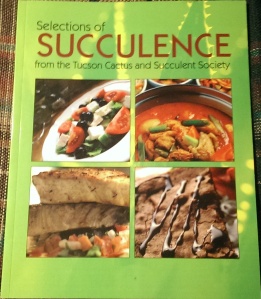 The book I decided on was “Selections of Succulence from the Tucson Cactus and Succulent Society.”   There were other choices, including one by chefs from Tucson’s restaurants, but this one had recipes I was more likely to make.  Unfortunately, the book makes no mention of what the Tucson Cactus and Succulent Society is other than it is all volunteer and non-profit.  But here is their website.  The book has a good selection of salads, casseroles, and meat dishes as well as a lot of desserts.  There’s also a fair amount of Prickly Pear recipes, including a section on how to harvest and process them.  There are several squash recipes and enchilada casseroles that I want to try. First up on the list is a tamale pie.

As an added bonus, I randomly received the “Bookman’s Winner”, which meant I got all the books that I intended to purchase for free. What a great bookstore!